Spirulina: the favorite superfood of athletes!

In tablets, capsules, flakes, or powder, spirulina is the star of food supplements. How did she conquer the hearts, the plate, and the habits of athletes? The curtain is raised on an unparalleled success story.

Spirulina, contrary to popular belief, is not an algae, but a cyanobacterium or blue-green microalgae. Historically, it is found in the lakes of tropical countries such as Mexico, Chad, and India. Spirulina does not therefore come from the marine environment. 3.5 billion years old, it is registered as one of the earliest forms of life on earth, and is, much later, already consumed by the Aztecs, who were fond of it long before us!

Jump back in time: It’s now up to NASA to include this food on the menu of astronauts on their space missions. Moreover, the government agency is not the only one to be convinced by the benefits of spirulina, now cultivated in artificial ponds all over the world. In fact, in 1974, the UN claimed it was the “best food of the future”. In 2005, it was WHO’s turn to use the virtues of this cyanobacterium in the context of missions fighting against malnutrition.

In addition, the low calorie content and the incredible nutritional richness of this natural food supplement make it a very popular product for people who want to lose weight while maintaining their mass. muscular.

In short, the past and future longevity of spirulina is undeniable, with many audiences! 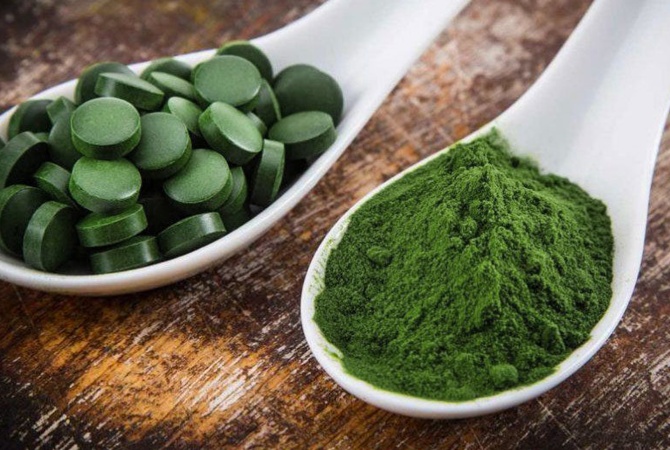 Spirulina and sport, a winning combo!

Spirulina is a super-food, in other words, its nutritional richness is extraordinary. Its composition is such that it provides energy to your body during exercise by improving, in particular , oxygenation of your muscles, and also contributes to post-exercise muscle recovery.

And for good reason:

• Containing up to 70% protein, spirulina is an ideal source of vegetable protein for all people following a vegetarian or vegan diet. Namely, it is the proteins that allow muscles to rebuild themselves

• This micro-algae is also made up of carbohydrates

• Being rich in antioxidants (such as phycocyanin which gives it its blue pigment, chlorophyll, and beta-carotene), spirulina fights against free radicals and oxidative stress, and preserves inflammations. In addition, it strengthens the immune system

On paper, spirulina is all good … And in practice too ! And it is because we believe deeply in this cyanobacterium and in its many benefits that we have decided to honor it in one of our flagship products: the RECUP Spirulina, Acerola, Organic Fenugreek. The synergy of these three components in the form of tablets allows you, sportsman, to optimize your recovery, to reduce your muscle aches, to improve the assimilation of nutrients during digestion, and to maximize the oxygenation of your organs. So what are you waiting for to let spirulina into your life?

Food supplements for trail running, what for?

How do you read the label of a protein?